Aerial Silks — Fitness and Fun at the Big Top

During the holidays, cold weather and decadent food can make it challenging to stay active throughout the seemingly never-ending winter season. This year, ditch that boring gym workout for something a little different. 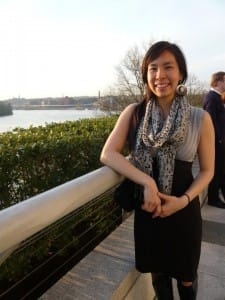 You might have seen it at Cirque du Soleil or during Pink’s high flying performance at last year’s Grammy awards, and it’s called aerial silks. The performances are literally dances in the air complete with extreme poses and jaw-dropping drops. However, silks are much more than an acrobatic show—they provide a unique and challenging workout that requires a combination of flexibility and strength. I spoke with aerial silks enthusiast and class instructor Christina Kaoh about her passion for the big top.

In a nutshell, what do aerials and acrobatics technically consist of? Is there a proper name for it?

The sport (or performance art, really) that I practice the most, is known by several names: aerial silks, aerial acrobatics, and tissu (which is French for “fabric”). There are other apparatuses, such as aerial hoop, or lyra, which is a circular structure suspended on a rotating point; aerial straps, which consist of straps which the performer grabs by the hand or loops their foot into; and rope, or corde lisse, which is a fabric covered rope. Static and flying trapeze are other forms of aerial arts.

How popular do you think that aerial silks currently are?

It’s become increasingly used as an exercise and more and more appreciated as a performance art. People, such as myself, train in aerial arts for the pure performance aspect of it and gain the strength and flexibility in the mean time. But a lot of classes use aerial apparatus these days as fitness apparatus and build conditioning classes based on aerial moves. It’s also become increasingly blended with yoga to ease practitioners into upside down poses and help increase flexibility.

How did you first get started? 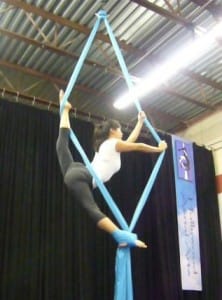 I saw Cirque du Soleil and was inspired to become just as proficient in the aerial art form (i.e. just as cool) that I saw in that show, which was aerial tissu, to be specific. I remember that I saw “KA” in Vegas one summer and was blown away by how amazing all the acts were. A few months later, I saw another Cirque show that traveled through my area and resolved to find myself aerial classes. Two days later, I was learning how to climb tissu and do footlocks!

Which muscles do aerial silks work? What health benefits does it have?

Aerial arts definitely work your back, core and shoulders, to name a few. Even your legs are engaged to keep them straight, lift them up and over your head, or keep your toes pointed. It really is a total body workout that engages parts of your body that may not be engaged in more traditional forms of exercise. Learning aerial arts can make you more flexible and it is an anaerobic workout since it forces you to work against gravity and use your own body weight by pulling yourself up or over the fabric. I also think it has psychological benefits because it forces you to face your fear of heights, being upside down and being in unconventional positions.

How can I get started with aerials and acrobatics?

Just go for it! That’s what I did anyway. I always hear, “I don’t have any upper body strength, so I’m going to wait till I’ve worked out more.” No. You’ll build it as you go. I could never complete a pull-up before and now I can do six really good ones at a time and it all came from going to class. Each time you struggle to pull yourself up the fabric or into a pose, you are strengthening your muscles. Be prepared to work muscles you may not normally use, such as back muscles, your forearms, and your hands. Your hand grip will become much stronger in time.

What can I search for when looking for gyms? 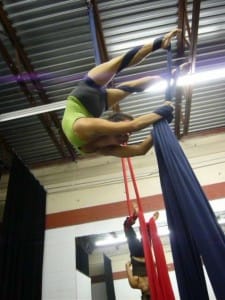 When looking for a gym, I suggest looking at the instructor’s style. How good are they with beginner students if that is your level? Some fabulous performers/coaches don’t make for the most understanding or compassionate instructors for beginners. Know what you’re willing to take. If they push you hard, is that going to leave you defeated, or do you thrive in that type of pressure? Most importantly, take a look at your instructor’s actual technique. I learn by emulating what I see and if I’m not impressed with what I see, then I’m not willing to learn from this person. An instructor can be strong and “know” the moves, but if he or she does everything with bent knees, relaxed feet, and by swinging into moves, then it’s likely that they won’t correct you in straightening your legs, pointing/flexing your feet, and developing muscle control as opposed to using momentum to get into position. All those small things make the difference in a mediocre performance and a fabulous one.

Editor’s Note: Christina Kaoh is an aerial silks instructor at Urban Evolution gym in Alexandria, Va. She has been practicing silks on and off for the last four years.