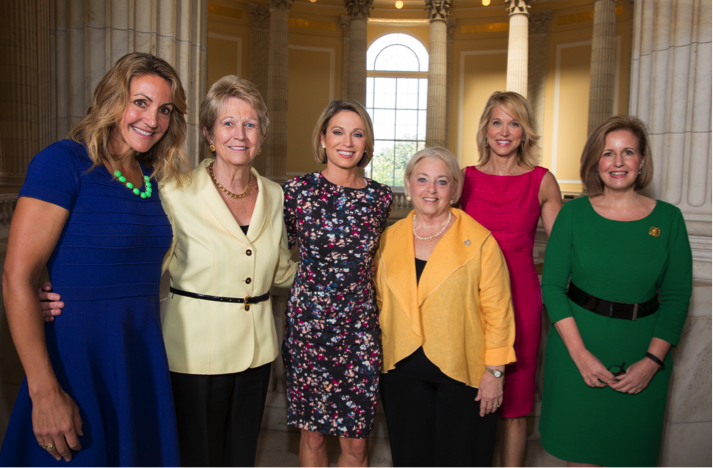 WASHINGTON– A bipartisan, bicameral audience of Members of Congress and spouses, cancer prevention leaders and diplomats gathered Thursday at the 24th Annual Action for Cancer Awareness Awards luncheon hosted by the Prevent Cancer Foundation’s Congressional Families Cancer Prevention Program. The Program’s signature event celebrates the efforts of congressional spouses, members of the media and others for their outstanding contributions to cancer education, awareness and prevention.

This year’s honorees for the Action for Cancer Awareness Awards:

·     Summer Sanders received the Excellence in Cancer Awareness Award for her passionate advocacy for skin cancer prevention. As an elite swimmer and Olympic gold medalist, Ms. Sanders spent many years in the pool and in the sun. She was diagnosed with malignant melanoma in October 2014 after insisting that her dermatologist remove a suspicious mole. Now a three-time melanoma survivor, Ms. Sanders lends her voice to education and awareness programs and promotes skin cancer prevention through social media.

·     Amy Robach accepted the Distinguished Service in Journalism Award for media leadership. Since an on-air mammogram at the age of 40 discovered her breast cancer, Ms. Robach has been a vocal proponent of the importance of annual mammograms for women beginning at age 40. She recounts her diagnosis and recovery in “Better: How I Let Go of Control, Held On to Hope, and Found Joy in My Darkest Hour.”

The Congressional Families Cancer Prevention Program began in 1991 as a partnership between the Prevent Cancer Foundation and the Congressional Club, a bipartisan organization of spouses of Members of the House, Senate, Cabinet and Supreme Court. Spouses active in the Program share an interest in advancing cancer prevention, early detection and education. For more information, visit www.congressionalfamilies.org.

About the Prevent Cancer Foundation

The Prevent Cancer Foundation is one of the nation’s leading voluntary health organizations and theonly U.S. nonprofit focused solely on cancer prevention and early detection. Founded in 1985, it has catapulted cancer prevention to prominence and fulfills its mission through research, education, outreach and advocacy across the country. For more information, please visit www.preventcancer.org.