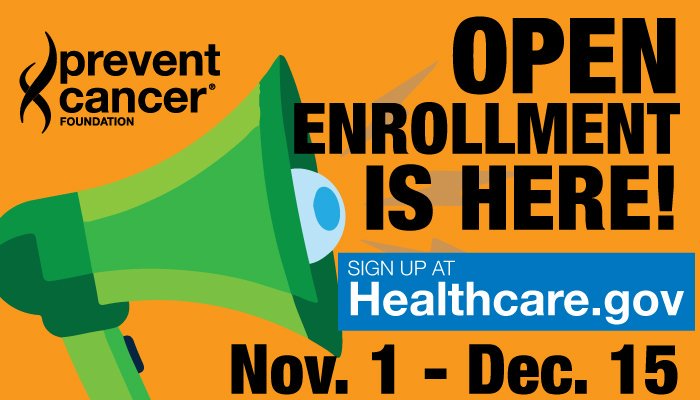 New changes in the market are expected this year. Premiums for some plans will decrease in most states, but subsidies provided to reduce out-of-pocket costs will also decrease, resulting in higher costs for some patients. With more insurers returning to the Affordable Care Act (ACA) exchanges, we could see a more competitive marketplace this year, which could offer additional plan options.

Experts do not anticipate an increase in enrollment numbers this year due to the repeal of the individual mandate penalty and the availability of short-term plans with lower premiums that aren’t sold on the exchanges. Funding to help consumers navigate the enrollment process has been reduced as well. During the 2018 open enrollment period, about 11.8 million people signed up or re-enrolled in an existing plan, which was a 3 percent decrease from 2017.

To learn more about the enrollment process and explore your coverage options, visit healthcare.gov.

A group of patient advocate organizations, led by the Association for Community Affiliated Plans, filed a lawsuit on September 14, 2018, to suspend the Trump administration’s recent ruling on short-term health plans. These short-term plans have lower premiums but aren’t required to meet Affordable Care Act (ACA) requirements, meaning they may lack adequate coverage for cancer screenings or treatments.

The U.S. District Court in Washington, D.C. heard oral arguments on October 26. The advocacy organizations’ goal was to suspend the ruling before open enrollment began on November 1, but the judge ruled there was not enough evidence to suspend the plans. However, he requested the plaintiffs return when they had more substantial arguments.

The Prevent Cancer Foundation® supports plans which provide comprehensive coverage for cancer patients and their families.

Under the ACA, insurance companies can’t deny or over-charge people with pre-existing conditions. If this lawsuit succeeds, these protections could disappear.

Protections for pre-existing conditions are critical to ensure cancer patients have access to the care they need. The Prevent Cancer Foundation® opposes any move to limit patient care and stands with our fellow advocacy organizations in supporting these protections.

The Trump administration on Thursday announced a new drug pricing model for the Centers for Medicare and Medicaid Services (CMS). Referred to as the International Pricing Index (IPI) Model, this new proposal aims to drive down the cost of prescription drugs in Medicare Part B by:

Though the model won’t take effect until late 2019 or early 2020, it will be mandatory for 50 percent of providers in certain areas in the U.S. According to the Department of Health and Human Services (HHS), this will save more than $17.2 billion in costs over five years for both the government and Medicare beneficiaries.

While this proposal offers potential cost savings to beneficiaries, it also poses serious access issues for those who need drugs to prevent or treat cancer.

Read HHS’ Q&A on the IPI drug pricing model and submit your comments on the proposed model.