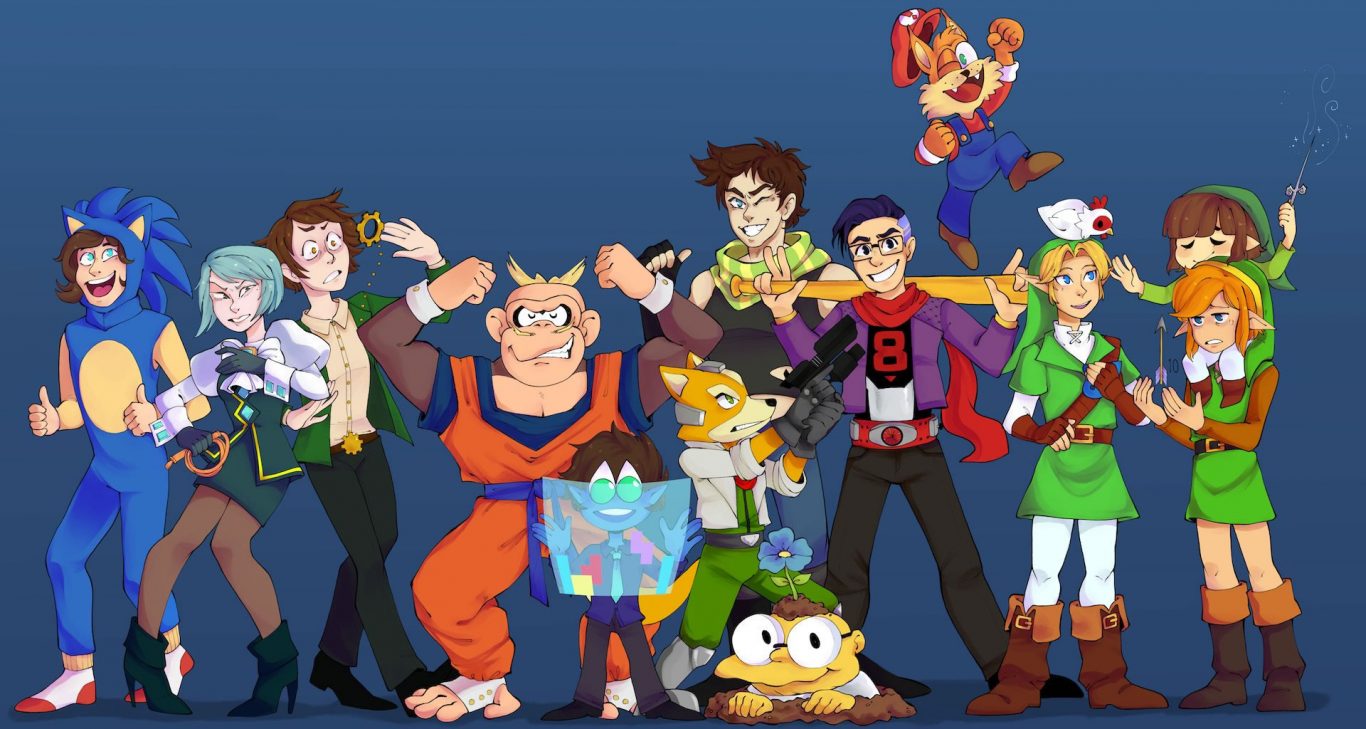 My name is Mark and I stream on Twitch as sort of a hobby. I’ve been at it for a year—it’s a really nice way to relax at nights when I have nothing else to do. My Twitch handle is Blackstar258, taken from David Bowie’s last album title “Blackstar”.

This is the story of how I made my charity stream, the Mark and Friends Smile-Time Variety Hour, more than I ever dreamed of.

Two years ago my cousin Steven went in for tests at the doctor’s, and it was there he learned that he had lung cancer.

It was a shock to all of us in the family, and the outlook wasn’t good. He did well with chemo for a long time, but around September and October of 2018, things started getting worse.

At some point during his battle, he had also developed brain cancer. Doctors started noticing sores and spots on his brain in October, so more aggressive treatments started. By the end of October, he was told there was nothing else the doctors could do for him. He started up hospice care and a few weeks later, on November 11, 2018, he passed away.

Since I started streaming back in December of 2017, I’ve always had the idea of doing some sort of charity event—either running one of my own or just taking part in someone else’s. They always seemed fun. I was inspired a lot by Games Done Quick, as well as The Runaway Guys Colosseum and Vinesauce is HOPE.

Around September 2018, I started getting the idea that I wanted to run my own event, but it wasn’t until October when Steven’s cancer got worse that I fully realized that I needed to. I started contacting some friends to let them know what I wanted to do, what charity I’d be supporting (the Prevent Cancer Foundation®) and the reason why (in honor of Steven).

There was a lot of stress leading up to the marathon. First of all, losing Steven while I was planning added tons and tons of stress. Then, I started having constant worries of “This isn’t going to work,” whether that be from tech issues, no one showing up, etc. A lot of things could’ve gone wrong…even the night before the event, I was up with friends really late putting final touches on the stream.

After all of the planning, the three-day event finally started on Friday, December 7, 2018.

We started the stream, and boom—Discord, our main method of communication, just completely died on us. Just our luck! Thankfully, we were able to handle it well enough and the first day went way better than I even imagined. We raised nearly $1,000 in just the first day, which was the goal for the entire event.

First slot on the second day happens and we reached our goal again. Okay, what next? Well, bump up the goal and see what happens!

We were told early in the marathon that a very, very generous person would be matching donations up to $1,000. We had no idea when he was going to strike, we just knew it would happen. NintendoCapriSun, a popular YouTuber and friend of mine, had his slot at 9 p.m. on Saturday, where he told us that he was also matching up to $1,000.

And that’s when it happened: the first thousand is matched. NintendoCarpiSun was in shock for minutes until he came to and said, “I’ll be donating that next thousand when my block is done.” BAM, another $2,000 in just a couple hours. I was completely blown away.

When the third day comes around, a friend of mine who goes by FaronHeights did something a little interesting with his run. Viewers could donate to mess him up badly in the game he was playing. That little incentive raised a lot of money. I had to keep changing the donation goal probably every 20 minutes because we just kept reaching higher and higher numbers.

The marathon came to a close Sunday around 4 a.m., with more than $5,500 raised for the Prevent Cancer Foundation®. I couldn’t believe it. At one point during the planning, I thought $500 would be a good goal. Then when we set it to $1,000, I thought, “Nah, that’s too high. We’re not reaching that.” The generosity people have within the gaming community is absolutely insane.

The biggest thing I learned from running this charity event is to make sure you have people that can help you. The Prevent Cancer Foundation® was insanely generous with how much they were willing to help. I came into this very inexperienced and I had no idea what I was doing, but from the first phone call with them, I knew things would be fine. Right away they gave me a rundown of everything they could possibly help me with and they made things very simple from the start.

Not only was the Foundation very helpful, but my friends were as well. Everyone realized how important this was to me and they all were there every step of the way. I can’t even begin to thank them enough for what they did for me, from keeping me sane to making sure things ran how they were supposed to. And of course, a huge thanks to my two artists, Wemblr and Comet, who worked a ton to make sure that everything looked great visually.

Making sure you have the right people is key, but making sure you have the right motivation is even bigger. This would have gone nowhere if I wasn’t motivated by what was going on around me. Losing someone to cancer sucks and it’s very easy for all the negatives to outweigh the positives. Steven loved video games and just having a good time with his friends and family. Rather than focusing on the fact that he left too soon, it was important for me to show the positive impact he had on my life.

The biggest takeaway I got from this marathon is all of the good that it did. There wasn’t one person who single handedly raised $5,500—it was a group effort. Without that kind of teamwork, none of this would’ve happened. I can’t wait to do this again in 2019.

Long time viewer, first time charity stream reflection article poster. I said it before and I’ll say it here too: your hard work, dedication, and passion truly showed in the stream. The event was a lot of fun, and I can’t wait for the next one!