View pictures of the event on our Facebook page: 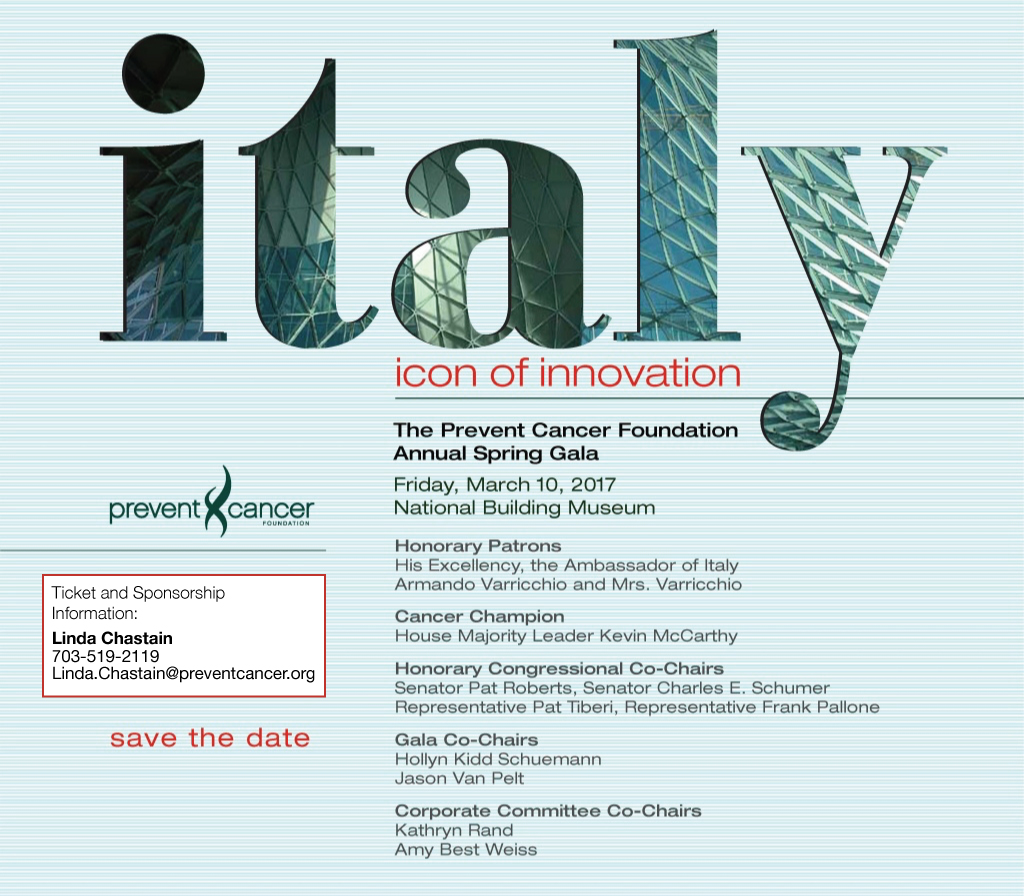 The Prevent Cancer Foundation Annual Spring Gala is recognized as one of Washington’s premier events, attracting more than 900 guests from the business, diplomatic, government, medical, sports, media and social communities.  The gala is recognized as one of “Washington’s Top 100 Events” by BizBash, and is a widely attended event, meeting all standards of official conduct. The 2016 Annual Spring Gala raised $1.5 million and on average, 84 cents of each dollar raised through the Gala directly supports the Foundation’s mission.

His Excellency, the Ambassador of Italy, Armando Varricchio, and Mrs. Varricchio

For more information on the Gala, please contact Janet Hudson at Janet.Hudson@preventcancer.org or (703) 519-2117

Since 2010, the Foundation has honored a cancer champion pioneer at the Gala. Past awardees have included;

2015 – Senator Mike Crapo ~ U.S. Senator from Idaho who is a two-time prostate cancer survivor. Senator Crapo collaborated for many years with the Foundation on a signature initiative, a Health Awareness and Screening Booth at the Idaho State Fair. He has also been a champion of legislation that helps advanced progress in cancer research and quality of care for cancer patients.

2014 – Mrs. Ellen Noghès ~ wife of former Ambassador of Monaco Gilles Noghès, a three-time cancer survivor who is focuses her efforts on raising awareness of cancer among the diplomatic community.

2013 – The Honorable Ellen Tauscher ~  For bringing awareness to cancer prevention and early detection by sharing her personal battle with esophageal cancer.

2012 – Congressman Michael Oxley~ For his work in the advancement of cancer prevention and early detection.

To make a donation for to the Michael G. Oxley Lung Cancer Research Fund click here.

2010 – Dr. Elmer Huerta~ Director of the Cancer Preventorium at Washington Cancer Institute, Washington Hospital Center.  Dr. Huerta founded the low-income prevention and screening clinic in 1994 and continues to use it as a vehicle for reaching the Hispanic/Latino community in the Washington, D.C.