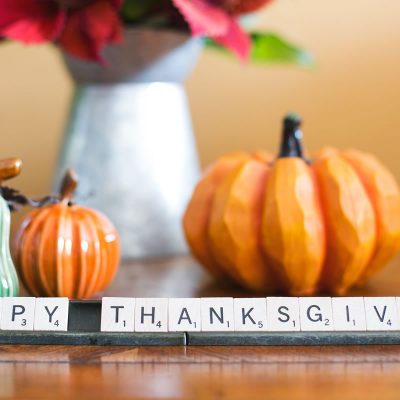 Thanksgiving is a holiday many of us look forward to every year. Between catching up with friends and family, eating amazing food and watching the parade, there’s a little something for everyone. But Thanksgiving can also wreak havoc on our healthy habits. According to the Calorie Control Council, a typical Thanksgiving dinner can contain more […]

Give Thanks by Staying Active This Holiday

Thanksgiving is a day of gratitude. It seems counter-intuitive then, that as we give thanks for our blessings—our health, I hope, chief among them—that we do not make an effort to live healthfully on this day. In fact, most of us do quite the opposite, eating rich foods to the point of discomfort and moving little.

It’s not the only way! Eating healthy and staying active throughout the year is a key factor in preventing cancer. In fact, new research shows that as much as one third of cancer deaths are linked to diet and physical activity. It’s certainly ok to indulge every now and then, but you can still make sure that your Thanksgiving meal includes plenty of vegetables, beans and whole grains.

The nation’s largest physicians group, the American Medical Association (AMA) has officially declared obesity a disease. Supporters of the disease classification believe this decision could lead to improvements in obesity prevention and treatment by spurring health insurers and the government to fund anti-obesity services and getting doctors to pay more attention to the condition. Opponents […]

Skip the Soda: Grab a Refreshing, Healthy Drink This Summer

Summer is right around the corner, as is the need to remain hydrated in the approaching hot weather. Drinking water is a great way to prevent dehydration, but be careful what other liquids you are grabbing this season. Sugary drinks such as soda are not good for you, especially those sweetened with high-fructose corn syrup. […]

It may not come as a surprise that people who smoke or are obese use more health care services than their co-workers, but you may be surprised to know that companies have started passing on those costs directly to employees. In 2012 there is expected to be a large increase in the number of companies […]

In Tim Karman’s recent article on the Washington Post’s Future of Food Conference, many issues which way heavily on the minds’ of policymakers and families alike were mentioned. However, the one “takeaway” that is a bright spot in an often contentious debate is the importance of eating a healthy diet, especially for children, to begin […]