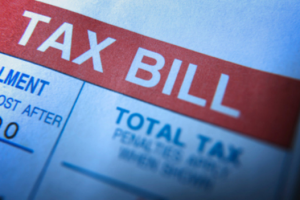 The GOP tax plan cleared one of its final hurdles this week after it was voted out of the Budget Committee and brought to the floor for debate. The bill has received scrutiny by many health care advocates for its measure to eliminate the individual mandate. The non-partisan Congressional Budget Office (CBO) reports that with this bill, 13 million Americans would lose coverage and those with insurance would see premiums rise by 10 percent.

However, as debate began Thursday night, it became evident that not all Republicans were satisfied with the bill. Most prominently, many shared concerns about the bill raising the deficit. The non-partisan Joint Committee on Taxation reported the initial estimate of economic growth to offset the $1.5 trillion bill would not be nearly that large, and the tax bill would actually increase the deficit by $1 trillion.

After a full night of debate on Thursday, it is clear Senate Majority Leader Mitch McConnell (R-KY) will have more negotiating to do for the bill to pass. Debate will resume today and voting should begin around 11:00 a.m. ET. However, the future of the bill is still uncertain.

Next steps for 21st Century Cures

The health subcommittee of the Energy and Commerce Committee will hear from stakeholders this week regarding the implementation of the 21st Century Cures Act. After receiving widespread, bipartisan support, the bill was signed into law on December 12, 2016, by former President Barack Obama.

Subcommittee Chair Michael Burgess (R-TX) requested Andrew Gottlieb and Francis Collins, Directors of the Food and Drug Administration (FDA) and National Institutes of Health (NIH), respectively, discuss their plans to implement provisions of the 21st Century Cures Act within their agencies. As the one year anniversary of its passage quickly approaches, Chairman Burgess says he intends to make sure patients will benefit. “We must ensure that it is implemented according to Congress’ design, and that the law has the support it needs to positively impact patients,” he said. 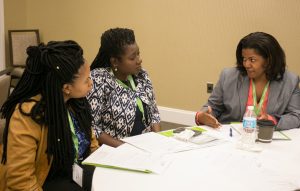 The Prevent Cancer Foundation® is hosting an advocacy workshop on Wednesday, April 11, 2018, right outside Washington, D.C. The workshop will feature leaders who have organized successful advocacy campaigns and programs to improve health care access or disease prevention in their communities.

Registration will open later this month—stay tuned for more information! 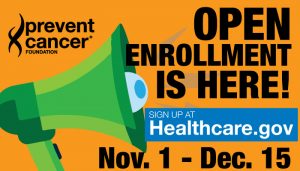 If you or someone you know will be looking to purchase health insurance through a marketplace exchange under the Affordable Care Act (ACA), the deadline to sign up is  Friday, December 15. This is the ONLY chance you have to renew, purchase or alter your insurance plan, unless you qualify for a special enrollment period.

For states with federally-operated exchanges, insurance plans can be viewed on healthcare.gov. The District of Columbia and some states, like Maryland and New York, run their own exchanges and may have different enrollment periods. Click here to see a list of those states and access their websites.

Our work in support of cancer prevention and early detection strategies includes making sure all Americans have the coverage they need. Help spread the word in your community!