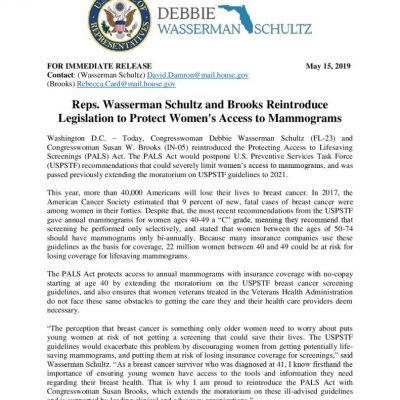 Alexandria, Va.—The Food and Drug Administration (FDA) last week proposed new steps to improve mammography quality standards. Among the changes is a proposed rule requiring mammography facilities to notify women with dense breasts about their breast tissue and the impact of breast density on the accuracy of their mammograms. These mammography standards, part of the […]

Feature Story Gene activity in the nose may signal lung cancer WEDNESDAY, March 8, 2017 (Fox News) — Genetic changes in the cells lining the inside of the nose might someday help doctors diagnose lung cancer, a recent study suggests. “The idea that you don’t have to sample the disease tissue but can diagnose presence […]

Feature Story  Do Screening Mammograms Cut Breast Cancer Deaths Or Lead To Overtreatment? Probably Both TUESDAY, January 10, 2017 (Forbes)–Whether screening mammograms can lower women’s risk of women dying from breast cancer has been debated for decades. That’s not surprising, given that breast cancer is the leading cause of cancer deaths in women worldwide and […]

Feature Story Rise in Early Cervical Cancer Detection Is Linked to Affordable Care Act TUESDAY, November 24, 2015 (The New York Times) — Cancer researchers say there has been a substantial increase in women under the age of 26 who have received a diagnosis of early-stage cervical cancer, a pattern that they say is most […]

Feature Story Biden’s Bid for a Legacy: A Moon Shot for Cancer WEDNESDAY, October 21, 2015 (The Atlantic) — For Joe Biden and his inner circle, it always seemed that the crowning achievement of his long, successful political career would be the presidency. As a senator from Delaware, Biden got close—he ran for the Democratic […]

We commend the American Cancer Society (ACS) for recognizing that breast cancer often does not wait until age 50 to strike and women in their 40s do need annual mammograms. The Prevent Cancer Foundation will continue to recommend that women begin annual mammography screening at age 40 with no barriers to access or cost-sharing.  It […]

What happens when a woman doesn’t have insurance coverage or the financial resources to pay out of pocket for a mammogram or finds it hard to make an appointment? What if she doesn’t know how or where to get a mammogram? The Prevent Cancer Foundation has a program dedicated to helping Latina women get the […]