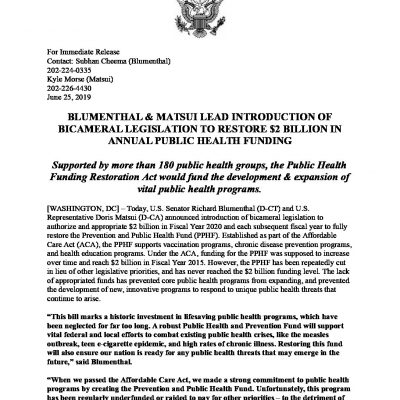 Republicans in Congress are still working to revive the American Health Care Act (AHCA) after failing to secure enough support for the legislation at the end of March in the House. Two new amendments were recently added to the bill in hopes of drawing in support. The first would allow states to define what is […]

Prevention on the chopping block

The Patient Protection and Affordable Care Act (ACA) included new funding for preventive health and new protections for cancer survivors. We need to act now to protect these programs. The following programs are in danger: Prevention and Public Health Fund. This program, first put in place by the Affordable Care Act, provides grants for community […]

The Patient Freedom Act: What would it do?

Sen. Bill Cassidy (R-LA) and Sen. Susan Collins (R-ME) have released the first proposal for a replacement for the Affordable Care Act (ACA). Titled the “Patient Freedom Act,” this bill would provide a compromise, where states could choose whether or not they would keep the structure of the ACA.  Here are the key points: State […]

Tell Congress to keep the Prevention and Public Health Fund

All year, we’ve been asking you to support the 21st Century Cures Act, an important piece of legislation that would increase funding for the National Institutes of Health (NIH) and the Food and Drug Administration (FDA) in order to spur research in new areas, such as precision medicine, and streamline approvals for certain drugs and […]