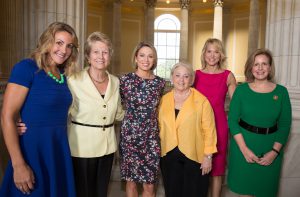 This year’s theme, Screening Matters, emphasized the importance of getting recommended cancer screenings to increase your chances of early diagnosis. Honorees Patricia Mica, Summer Sanders and Amy Robach, who are all cancer survivors, use their platforms to advocate for early detection and cancer prevention in their local communities and across the US.

Patricia Mica (spouse of Rep. John Mica of Florida) accepted the Congressional Leadership Award from Caroline Aderholt (wife of Rep. Robert Aderholt of Alabama). Ms. Mica is known as a leader in the Republican spouse community and a long-time supporter of the Congressional Families Cancer Prevention Program. After recently completing colon cancer treatments, Ms. Mica recommitted to the fight against cancer through community outreach in Florida and beyond. Her remarks stressed the need for support for those with cancer, and the importance of early detection, advising the audience not to delay screenings or ignore warning signs.

Olympic gold medalist and television host Summer Sanders was presented with the Excellence in Cancer Awareness Award by Marcelle Leahy (wife of Sen. Patrick Leahy of Vermont and a melanoma survivor). In October 2014, Ms. Sanders insisted her dermatologist remove a mole on her calf, which turned out to be malignant melanoma. As a three-time melanoma survivor, she serves as a passionate supporter for skin cancer prevention, lending her voice to education and awareness campaigns and speaking out on social media. Ms. Sanders reminded luncheon attendees that it’s important to wear sunscreen for any outdoor activity— whether a walk around the neighborhood or a day at the beach.

Amy Robach, news anchor for ABC’s “Good Morning America,” was honored with the Distinguished Service in Journalism Award, presented by Alfredia Scott (wife of Rep. David Scott of Georgia and a breast cancer survivor). In 2013, her Good Morning America producers and her co-host, Robin Roberts, a breast cancer survivor, convinced Ms. Robach to receive her first-ever mammogram on-air for a Breast Cancer Awareness Month segment; weeks later she shared her diagnosis live on the morning television program. Ms. Robach is a vocal advocate for women to begin receiving mammograms at age 40, and urged every woman in the audience to get a mammogram even if she has no family history of the disease.

The messages from the speakers and honorees reminded the audience that screening does matter to Stop Cancer Before It Starts!® Congratulations to our honorees!